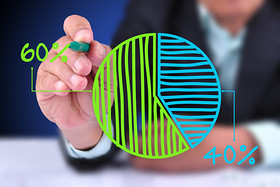 When it comes to flipping over a new page of your calendar we know you could care less what month it is! You, (the market) have no idea (or interest) whether it’s November or March. Unfortunately, we are all inclined to pay attention to the calendar because those that run our 24 hour media/news cycle get paid to make such an imprint on our brains.

October is a bad month for the stock market, right?

Again, we’re trained to think so. Sure, October has had some dates to remember… The month is famous for some market crashes like the “The Panic of 1907”, “Black Tuesday” (which kicked off the 1929 crash), and “Black Monday”, October 19, 1987, when the Dow Jones dropped 22% in just one day.

Ironically enough, most bad Octobers have been due to issues that came from September. Two of the three above listed crashes were delayed reactions from catalysts that kicked off in September; which historically actually brings more down markets than does October.

All that being said, we had a wild October with some long lost volatility! After the S&P 500 peaked on September 18th, it was all downhill from there until October 15th. The last two weeks of the month were the strongest since July of 2009. For those with short-term memories, that was right after the sky had fallen and nobody trusted any “bear market rallies”.

This time “it’s different” in that we haven’t seen a meaningful correction in years. The S&P 500 bounced back 7% in two weeks and in case you’re wondering…we’re once again bumping up against “overbought” conditions. This is the type of market that can absolutely make you insane. (more on this thought later…

Here’s the current summary of the MPG Core Tactical 60/40 portfolio mix, which is updated as of this writing (November 3, 2014).

What adjustments did we make?

The following moves were made during the month of October:

We interrupt this program to inform you that stock picking is often a futile endeavor!

92% of your portfolio’s long-term performance is based upon your allocation, not the genius of your individual stock selections. That said, it sure sounds better to tell people at a cocktail party that you own Alibaba or a ground breaking biotech company that’s going to wipe out Ebola than it does to brag about owning a stodgy index fund.

For those that have been following this series of articles, you’ll gradually understand that part of the point of this exercise is to educate investors on why picking stocks can make you rich, poor, and crazy. The reality of what picking stocks does for the health of your investment portfolio is what we really want to show you. In the long-run, it’s not the stocks you pick but rather it’s the areas in which you pick them that matter.

As a professional investment advisor, there is virtually no upside in picking stocks. If you pick a good one and hit a “homerun”…the expectation is that most other picks should be in that neighborhood; in other words the bar has been raised to unrealistically high expectations. Conversely, if an advisor picks a dog of a stock, it sticks out like a sore thumb on each monthly statement (even if accounts for less than 2% of the portfolio)

This past month Clean Energy (CLNE), InvenSense (INVN), and Monitise (MONIF) have absolutely laid an egg. Let’s take INVN as a quick example; we go from buying it in April for $21 and in a few months it makes us a quick $4,000 as the stock rose to over $25 per share. On October 29th it gets about a 25% haircut after an earnings miss. MONIF is also stinking up the joint all due to whom it wants to marry. What do we mean here? When Visa (V) announced it was questioning its stake in the company the stock got demolished. What matters to those who are still hanging on to Monitise is that eventually it will be bought by a company like IBM. Yes…we didn’t say “it may be bought” but rather it will be, and it’s for those reasons that you hang onto a dog of a stock like that.

Here’s the bottom line: Stay true to your goals and target allocation. When things get nasty and volatile (like they just did last month) you need to ignore the noise and stick to your discipline and plan. That’s exactly what our “60/40 Benchmark” does every month. Like a monotonous zombie on Halloween, this model simply buys what went down and sells what went up.

With our standard and passively managed 60/40 Benchmark we made the monthly and automated adjustment to the allocation. On the last trading day of the month we sold equities (what went up) and with the proceeds we bought back bonds (with what drifted a touch lower):

Speaking of comebacks…do you remember last months article where we talked about VNQ (Vanguard REIT ETF) still warranting a viable place in your portfolio? That portion of our “alternative” asset class is now up +23.03% YTD and positions that were dogs, like DXMIX (Direxion Indexed Managed Futures Strategy Fund), have totally turned around with it being up +10.39% over the past three months. Folks…if you haven’t got the message yet… what we’re preaching here is that the best time to fix a leak on your roof is on a sunny day.

Where are we going from here?

Economists demand a “perfect 10” to lay out what they feel is a good time to invest. Our take on this is that there is never such a time and no matter what economic period it is that you’re looking at there will always be something to fret and worry about. We just exited an almost unprecedented stretch of a market correction and short-term recovery that one would think we’re in the clear. This recent “V-market market” activity is exactly what can destroy the average investor.

The past two weeks of market activity depict a classic case of “too far too fast”. The challenge here is that everyone is scared out of their minds but at the same time it’s simply not prudent to “not” be in the market because it could easily run higher without much of a sustained and rational reason. What do you do?

We will buy the “market” on dips just as we did in mid-October. The areas to focus on are where there is a “sale”. Trim back REITs per your allocation as they have clearly risen far beyond expectation. We believe you should buy back in where there is some value. Take a look at gold (GLD) as an example for an investment that has been talked up way too much and then forgotten about when it actually counts.

See you next month!