You’ve had some wild days but perhaps none were as volatile or memorable as October 19, 1987! 30 years ago today you plunged -508 points for a record -22% decline in just one day! By today’s standards the 508 point decline wouldn’t be something to celebrate but wouldn’t really move the needle too much; only about a -2.2% decline. Believe it or not we’ve now endured drops like this 17 times since then!

Speaking of today, however, what would it look like if we had another stock market crash? If the stock market lost -22% in one day we would see the Dow Jones drop about -5,094 points as of today’s close.

We have two questions for you with regard to this not so pleasant walk down stock market memory lane:

(1) What would YOU do if Mr. Market suddenly tested your portfolio to those levels?!

(2) If you had a bunch of cash today would you dump it into the market at these historic and record high levels?

With regard to the first question, allow us to be presumptive and answer for you:

You would lose your mind and panic!

That answer applies to about 90% of you out there. Let’s categorize the other remaining 10% as those who are in the “I’m prepared” for such an event bucket. The first group within that bucket are those that actually have a strategy in place with investments that are hedged and inversely correlated to the stock market. Ideally they have an advisor guiding this process and enforcing an educated and unemotional approach to investing.

The second subset within the “I’m prepared” bucket are the ones who are in cash waiting for the other shoe to drop. They are in pre-crisis mode and in a sense feel smart that they’re sidestepping the ‘sky is falling’ type event that is sure to come. On one hand they are indeed “safe” from a down day or stock market crash; on the other hand they also have missed out big time on one of the strongest markets in history.

The real irony here is that the people who are waiting for that crisis…likely won’t do what they think they will once it actually hits. In other words….if we got another 1987 type day do you really think they would jump right back in the market the next day? Nope. What if the crash wasn’t quite so drastic and not -22% in one day but rather a gradual beating of about -50% over the course of a year like in 2008. Do you think they would finally think…”yes…NOW is the time to get back in!”. Nope. With this mindset they will always be in a “we’re in a bubble” or “we’re in a crisis” mode and no time will ever seem right.

As for our second question and “what would you do” if you invested cash today only to wake up tomorrow with a -22% drop? The reality is that there are mechanisms in place now that may mitigate some of this disaster but to stay on point let’s pretend you had $100,000 cash and it got smacked for a -22% loss. (you now have $78,000….ugh!)

Before we begin let’s quickly touch on what happened to the group of investors who indeed lived through that day 30 years ago. If they held on for just one year, by October 20th of 1988 they would be back just over their initial $100k investment and 30 years later it would actually be worth $2.1 million!

Now of course a lot happens over a 30 year stretch, right? It’s not as though it was a straight line up for the stock market to recover that day; there were many ups and downs along the way. Here is a sampling of them to refresh your memory on how many major market stressors there were:

Even with all those serious events and headlines, the misfortunate timing of a $100k investment turned into $2.1 million! But you say…”things are different this time“, right? Well sure they are…and they always will be! For argument’s sake let’s just pretend and concede to your belief that the world is a dimmer place as it relates to investment potential. Let’s assume the stock market doesn’t return the approximate +10.68% performance it managed through all those events. How about it offers about 20% less in returns than it did 30 years ago?

Albeit quite pessimistic, if that premise is used… guess what your ill-timed investment at the top of today’s record stock market would be 30 years from now?

$100,000 invested today over 30 years at 20% less the historical return would become $1,169,969.81. While this is obviously considerably less than the previous returns it shows you the simple example of having a long-term approach and mindset.

Tune out the noise because hope or emotions are not investment strategies! 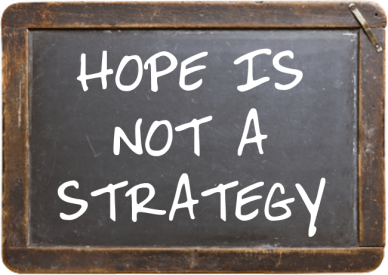