We won’t rehash what’s happened to the stock market due to the global pandemic of COVID-19. Like many right now, it’s been overwhelming and just hearing the word “Coronavirus” with constant updates has become all-consuming in everything we do. That said, there will of course be areas of the stock market that continue to get punished but others that provide opportunity once we get through this.

We believe the broad market will recover to the full levels we recently saw within the next three years. Some economic sectors, however, will struggle more than others as have a few additional conflicts to resolve. One such sector is oil and with the Saudi Arabia and Russian trade spat we saw U.S. oil prices drop -34% in one night! Which stocks will survive and which have the best chance to recover?

The price of oil has had some historically volatile periods but what we’re seeing now is clearly unusual. When discussing oil prices it’s critical to adjust for inflation. The chart below does a great job of comparing where we were right prior to this crisis in January of 2020 to the some of the prior points in history (the black line shows the nominal price of what we would have paid at the time). You can also note that the absolute peak was in 2008 where the inflation adjusted price was $148/barrel. The most recent lows had been in 2016 but we’ll update this chart later and describe where we are now and what the long-term opportunity is. 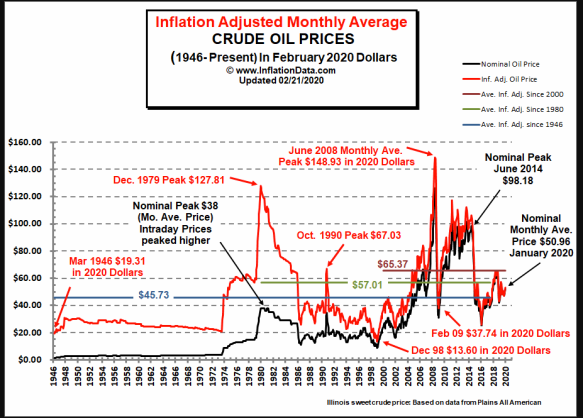 As of market close this past Friday, March 26th, the price of a 42 gallon barrel of West Texas Intermediate Crude Oil (WTI) was at an astounding low of $22.60! To put that in context that is about half of the average inflation adjusted price (since 1946) of $45.73/barrel (look at the blue horizontal line in the chart above). You can get a large family 12 piece bucket of Kentucky Fried Chicken with three large sides and six biscuits for less than a 42 gallon barrel of oil…What happens when oil eventually climbs back to the $45-$55 range of where we think it will be in the next few years? In our opinion oil stocks will not only rise but the ones we are looking at closest should easily double in price from where they are right now.

The top 4 oil stocks we would like to quickly compare are the following (and in no particular order):

Exxon Mobil (XOM), ConocoPhillips (COP), Occidental Petroleum (OXY), and Chevron (CVX). The best of the bunch is arguably Chevron (at least performance-wise over the past several years, but each has a story behind it). Below is a quick chart showing YTD performance relative to the Dow Jones.

As we noted, Chevron has done the best but note how all have dramatically underperformed the broad stock market (yellow line in the chart above). Chevron trades at $68.78/share with the highest P/E ratio from our group at 44.66 and a dividend of 6.76%. It has a beta of 1.06 which indicates it’s volatility relative to the overall market. (in this case 6% more volatile). If it hits a 1 year target of $97.38 that would return 41.58% from current levels. Chevron might be the safest bet of the group but like anything that is debatable in this unprecedented environment.

The most beaten down and worst of the bunch, in our opinion, is Occidental Petroleum. OXY trades at $11.61/share with negative earnings and the lowest dividend of the bunch at 3.43%. It has a beta of 1.05 similar to Chevron but far less appealing overall, unless one is bottom fishing and more speculative. If it hits a 1 year target of $21.29 that would return 83.38% from current levels.

We’ve only highlighted four stocks and each again has its own story deserving a closer peak under the hood. That said, if any of these raise questions or curiosity from you please comment below and we’ll do our best to get back to you.

Lastly, if picking one oil stock is simply too overwhelming or you just don’t want to put “all your eggs in one basket”…consider one of many Exchange Traded Funds (ETFs) that are available. Rather than pick one or two of these (risking missing the mark entirely or being exposed to something company specific) you can invest in an ETF that tracks an entire basket of stocks in the oil sector. One such example is the First Trust Oil & Gas ETF (ticker symbol FTXN). Click here to see more information but you can see it’s an easy way to gain disciplined exposure to 49 of these stocks in a sector that will see brighter days one day soon.