Many of our “letters” to you are with a cautionary approach so that readers of this blog fully understand the risks and rewards of engaging with you. With your erratic personality perhaps the last thing you need is a drug to add to your volatile ways. That said, we also attempt to sprinkle in some humor and puns to get our point across…even if you’re at an all-time high (first pun in case you’re not paying attention!).

Whether you are a proponent of legalizing marijuana or not there is no denying that the cannabis industry is real and here to stay. Would it surprise you to learn that cannabis is the United States’ second largest cash crop? Believe it or not it is the second most valuable industry next to corn and is worth over $40 billion! Several reports earlier this year also estimate that legal cannabis sales could grow by at least 30% in 2018.

The marijuana industry is predicted to grow like a weed (second pun). All kidding aside, the Bureau of Labor Statistics (BLS) projects over 250,000 new jobs in this industry by 2020 which is far more than those expected from manufacturing! By 2024 the BLS actually forecasts manufacturing jobs to decline by 814,000. Ignoring the potential growth in this industry or that it has fast become a major economic driver and job-creation force in the U.S. economy is a mistake.

Public opinion is still divided (not a surprise nowadays…) but it’s rapidly changing. A poll conducted by CBS News in July of 1979 revealed that only 27% of those surveyed thought marijuana should be legal; that number by mid 2017 is now at 61%. Even with this momentum there still remains some obvious hurdles: (1) Marijuana is still illegal at the Federal level and (2) Congress has plenty to focus on right now with healthcare and tax reform so legalization is a lower priority for now.

So…how do you play this opportunity, or should you???

If you’re a true investor as opposed to a speculator we’ll begin by letting you know there are major risks in this budding sector. (please tell us you caught that pun?!)

Full disclosure here but when initially asked to cover this topic My Portfolio Guide was pulled a bit out of our comfort zone. When playing word association games “weed” and “Wall Street” didn’t immediately come to mind. All that said, we believe there is opportunity here but only for those that can handle the risk and volatility.

As with any emerging market there will be plenty of hype but not every stock will be a homerun. Don’t let anyone convince you that a certain marijuana stock is the next Apple or Google and you’re an idiot if you don’t invest ASAP. If you want a more recent example of industries that seemed like a no-brainer just think solar stocks. As much as solar energy may be our future…there were far more stocks that blew up than those that made anyone wealthy. With all that said here are our 3 simple pieces of advice on marijuana stocks and then we give you 8 potential investments that we’ve screened.

(1) Most marijuana companies still trade as penny stocks and with that comes far more risk. Ask us for more detail if you have specific questions but like a ‘cloud of smoke’…these stocks can easily be ”here today and gone tomorrow”.

(2) Ideally look for companies that are trading over $5 per share, have plenty of liquidity/volume, and for even more stability lean towards ones that may be linked to a larger company.

(3) Only allocate a small percentage of your portfolio towards a sector like this. Consider a maximum exposure of no more than 2% to 5% of your portfolio and if you have trouble choosing between several stocks consider smaller bets diversified into each one.

Lastly, and in no particular order, here are eight marijuana stocks we’ve researched and like: 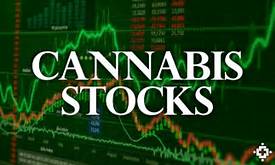 The medical marijuana industry is more developed in Canada and it could soon be voted legal for all Canadian adults. Canopy has exposure to about half of Canada’s medical marijuana patients and that market is growing by 10% per month! If marijuana gets approved for recreational use in Canada it will be the second country (behind Uruguay) to do so. Canopy is also one of the few companies that is authorized to export dried cannabis to foreign countries.

Canopy is the largest producer of medical marijuana in Canada and has a market cap of $1.72 billion. The company has been in business since 2014 and offers a vast collection of brands supported by over half a million square feet of indoor greenhouse production capacity. It’s currently trading at $9.97 and has a 52-week range of $3.44 to $10.51.

Aurora Cannabis is a competitor of Canopy’s and could give them serious competition over the coming years. The company has a smaller market cap at about $917 billion but has perhaps the best growth potential over the long-term with the building of the most technologically advanced 800,000 square foot facility. They appear to be positioning as the low cost per gram producer with a number of cost saving and lower overhead type advantages. Along with farm credits and free mountain water, their rural location in Leduc County, Alberta has the lowest corporate tax and power rates in Canada.

Insys Therapeutics is an American commercial-stage specialty pharmaceutical company based in Phoenix, AZ. The company has been in operation since 1990 and specializes in making sprays and treatments for patients with cancer and chronic pain. They’re also developing treatments for other conditions such as pediatric epilepsy and Prader-Willi syndrome. On a small side note, Prader-Willi syndrome was one of the causes and charities that Team My Portfolio Guide raised funds for a couple years ago. (click #TeamMPG if you’re interested in that story!) Insys has a smaller market cap at just over $662 million and the stock has traded in a 52-week range of $8.68 to $15.05. The past three months have been brutal to shareholders as Insys is down -32% in that time.

Most recently there have been several lawsuits brought against the company which would lead us to approach this one with caution but still keep it on your radar. Six former Insys executives have been charged with fraud and racketeering so until we see how this pans out it’s again wise to be a spectator for now…

First off, how can you not laugh at this ticker symbol and company name? Weed is one of the smaller and perhaps riskier positions we’re looking at but it has some intriguing prospects. An initial glance would not attract serious investors due to some rather weak financials and obviously no profits.

The company was founded in 1999 and is based in Tucson, AZ. Weed actually had its original roots as a precious metals miner but rebranded in 2015. The company provides research and innovational work for the entire cannabis market. Weed has hired world renowned scientists to research and develop plants attractive to the medical community that have higher resistance to pests and drought conditions. Weed’s goal is to also become a “seed to sale” company that provides the infrastructure, financial solutions, and real estate options to the industry.

Like any exciting and new industry there will be stocks that benefit from the growth while not directly producing the main product. Kush Bottles supplies the packaging and accessories for cannabis producers. The old saying of “as the tide rises so will all the boats” applies here. Although Kush is small with only a $112 million market cap you can bet that this company will grow as the marijuana industry matures and continues to expand.

Kush is based in Santa Ana, CA and was founded in 2010. The company has been recognized as one of the fastest growing companies in America. Their recent third quarter results for 2017 show record revenues that were up 103% over last year. Kush trades at about $1.92 per share and has a 52-week range of $1.61 to $5.00.

One potential speed bump to many marijuana stocks is increased regulation but this ironically could be a catalyst for Kush. The company will actually continue to thrive in regulated markets where strict packaging rules are being pushed. The more states regulate and demand strict and compliant packaging, the more Kush will expand on its already market leading position.

GW Pharmaceuticals has been in operation since 1998 and is a biopharmaceutical company based in the United Kingdom. The company is one of the leaders in creating products helping patients deal with issues related to multiple sclerosis. This is perhaps a way to trade a marijuana stock that has the partnerships of some larger pharmaceutical players. GW Pharmaceuticals internationally approved product is Sativex which is marketed with partnerships from Bayer AG (BAYRY) and Novartis (NVS).

As a more established company it also has a larger market cap of $2.79 billion. It also currently trades at about $109.95 per share which is in stark contrast to the bulk of marijuana stocks that trade for under a buck. The 52-week range for GW Pharmaceuticals is $92.66 to $137.88.

How about a marijuana stock that is doing something besides burning cash? Aphria is one that is actually earning money! With a market cap of $851 million, the Leamington, Ontario based company is one of the few with plenty of cash on the books and the first to report positive earnings in consecutive quarters. Aphria trades at about $5.95 per share and has a 52-week range of $2.49 to $6.60. The stock is up about 117% over the past year and with a recent hiccup on their last earnings report you may be able to buy this on a small dip.

Lastly, if the high risk high reward reality of investing in marijuana stocks has you intrigued but still scared or undecided…you may want to consider diversifying away some of that by buying an ETF. Although we say it’s “diversified” the truth behind the first medical marijuana exchange traded fund is that it’s not really all that diversified! Horizons Medical Marijuana Life Sciences (HMMJ) consists of 14 medical marijuana stocks of which 10 are based in Canada. Click here for a link in case you’re curious to learn more what was in the fund as of June 2017.

In summation, there is no argument that the marijuana industry is becoming a real part of our economy. It’s not our place to judge who uses it and in what form but the reality is that a growing numbers of states (eight plus our nation’s capital) have made it completely legal to anyone over 21. Some of the initial hype and volatility is behind us and investors may now want to start nibbling at some of these companies that have been hit in recent months. There are of course numerous risk levels and approaches to investing in this space so please make sure you’re going about things the right way in your quest to become a “marijuana millionaire”.

In the meantime time we welcome your questions and feedback!